During the 1960s Yorkville was a cultural hotspot, the Canadian equivalent of San Francisco’s Haight Ashbury or New York’s Greenwich Village.

Full of clubs, coffeehouses, experimental art galleries and bohemian boutiques, Yorkville was far more than just a hippie haven. It was a vibrant artistic community of international renown, contained within several city blocks.

By far the most famous of all Yorkville’s clubs was the Riverboat coffeehouse, at 134 Yorkville. Owned and operated by Bernie Fiedler, the Riverboat opened in October, 1964 and quickly became part of a prestigious North American circuit that included Detroit’s Chess Mate and New York’s Bitter End. Situated below street level, the club seated 120 people in red booths amid pine walls and brass portholes. 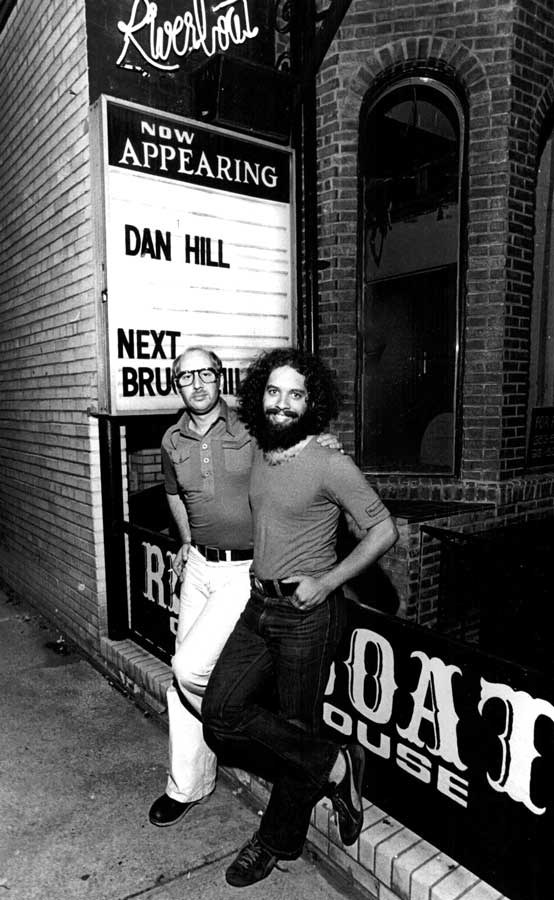 The Riverboat is where the protest folk singing star Phil Ochs wrote his popular ballad “Changes.” When Eric Clapton was in Toronto with his band Cream, the Riverboat is where he went, with his hair tied in a bun as a disguise, to hear Tom Rush perform. When actor Jack Nicholson was in town shooting The Last Detail, he snuck in through the Riverboat’s backdoor to catch some late-night music. Everyone played the Riverboat except Bob Dylan, although even Dylan was rumored to have sat, incognito, in one of the back booths one night.

Most significantly, the Riverboat was home to many of the biggest names in Canadian music, including Gordon Lightfoot, Joni Mitchell, Bruce Cockburn, Murray McLauchlan and Dan Hill. Many of them got their first taste of performing there and wrote songs in the club’s tiny rehearsal room, with its graffiti-lined walls and lively acoustics. Lightfoot, who played to four full houses a night in 1965, wrote his song “Steel Rail Blues” there. “For me,” Lightfoot once said, “the Riverboat was my first taste of the big time. It indicated that you must be really doing something.”

Mitchell, who first performed at the Riverboat in November 1966, wrote “Night in the City,” her tribute to the bright lights of Yorkville there. And it was at the Riverboat where she first played her most famous song, “Both Sides Now.” Before Neil Young found fame south of the border with Buffalo Springfield, he’d appeared as a fledgling folksinger at one of the Riverboat’s “Hoot nights.” When he returned to Toronto as a solo star in 1969, he performed for a week at the Riverboat—and later paid tribute to the club in his song “Ambulance Blues,” in which he sang “back in those old folkie days, the Riverboat was rockin’ in the rain.”

In 1978 the 15 year lease came to an end, and with the lowering of the drinking age and the stiff competition from bars offering live entertainment, Bernie Fiedler decided to close the Riverboat for good. Both Dan Hill and Murray McLauchlan performed at its emotional wake. They, along with the hundreds of music lovers who attended the week long finale, said goodbye to a tiny club that had served, in many ways, as the birthplace of Canadian popular song.

Yorkville experienced a multi-million dollar makeover in the 1970s. Today, it is home to posh restaurants and expensive boutiques, and serves as a fashionable shopping district to tourists and visiting movie stars. Where the Riverboat once stood is now the west side of the Hazelton, Toronto’s most prestigious luxury hotel.

But the Riverboat will not be forgotten. In 2009, Heritage Toronto recognized its significance with an historic plaque marking the site. All of the stars came out for the unveiling, including Dan Hill, Murray McLauchlan and Gordon Lightfoot. Bernie Fiedler, looking out over the large gathering, could not have been happier. The little club he had opened back in 1964 had grown to iconic status and will now be forever remembered as a major cultural landmark.

Nicholas Jennings is one of Canada’s most respected music journalists and author of Before the Gold Rush, an acclaimed history of the Yorkville era of Canadian music in the 1960s.